Hi, welcome to Dungeons and Dragons Wiki! Thanks for your edit to the User:Ganteka Future page.

Thanks again for your help with the character(s) I plan on using soon. The info helped a TON! --—Preceding unsigned comment added by Zeshion (talk • contribs)

Hey Gan. DD mentioned that you made the main site logo and he was going to ask you to do another one for the RC, but it doesn't look like he left the request on your talk. Mind if we bug you for one? - TarkisFlux 20:57, October 15, 2009 (UTC)

Oh, I had talked to him and was planning on doing it. Just haven't gotten to it yet. I'll probably get roughs ready for reviewal in a day or so. I was planning on using parts from the main logo, keeping it as simple as possible. Also, as a note, here is the crest part of the main logo for reference. --Ganteka Future 21:54, October 15, 2009 (UTC) 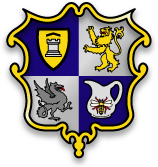 Did you ever get those roughs up? I'm using that for the RC template for now and that's fine, but since the RC template is approaching completion I was hoping for the others. - TarkisFlux 06:00, November 2, 2009 (UTC)

Well, the snag on that currently is, the font that I need is on my 3rd computer, which I won't have access to until Sunday the 8th (since I'm on sorta vacation at the moment). I thought I had the font with me, but alas, I do not. I suppose I'll just upload roughs this evening when I have a bit of time with a substitute font so you guys can get an idea. --Ganteka Future 15:58, November 2, 2009 (UTC)

Not to be a pain in the ass, but we've had a usable template for almost two weeks now and still no ratings from you. No pressure, just a reminder. --DanielDraco 21:16, November 23, 2009 (UTC)

Dude! Thanks for rating my Clavant Race! I know you posted that it wasn't the best, but seriously thanks for taking the time to bust out a rating. (I didn't even post it in the "Rate My Stuff" forum.) You rock! Peace! --Jay Freedman 01:04, December 4, 2009 (UTC)

Hey, I have been keeping up with your gods and wanted to say that I like them a lot. I too am currently describing my pantheon but right now am just getting some skeletal framework up. Anyway just wanted to say I like your stuff and I hope you keep it coming. --TheGrizz 07:04, January 4, 2010 (UTC)

In User blog:Ganteka Future/The days of The Tavern, The Meltdown, and memories.

Also the following linked page no longer exists since The Tavern was deleted:

Thank you for the instructive history lesson. :-) -- Stelio (not a user)

I saw your message. What parts in particular are not formatted? And I notice the prestige class is not showing up under the 3.5e homebrew PrCs.

Well, there are quite a few differences. Noticeable off the top I see that it needs a whole host of Semantic Media Wiki Property tags. Every ability in the main class table needs to be capitalized and linked to the class features using anchors. The skills need their linked property tags. All the class ability names need to be anchored. The tables need the proper "class=". It's got categories we don't use (user categories are being phased out and removed from all articles, slowly) such as "Bad Guy" and "Specialized". Probably some other stuff too, since that's just the stuff I notice off the top here, which is why you should really do that thing I said and go here and do the new class thing. It'll save you a lot of trouble and effort in the end. Also, don't forget to sign your posts using --~~~~ that little bit (it converts into your name when you save). --Ganteka Future 03:18, April 25, 2010 (UTC)

Hello again. I notice the arcanovore class (above) still doesn't appear in the 3.5e prestige class navigation or table. Is there something else I have to do? Thanks. --Lord Rumpus 06:50, April 30, 2010 (UTC)

Not sure exactly what to put for my pictures. I can tell you that the picture on my Nobody Shift spell was made by me, but the other pictures I found on Yahoo! Images.--SteveAce89 02:15, June 5, 2010 (UTC)SteveAce89

I'll beat Gan to the response -
We need you to specify licensing information when you upload any image. There's a drop down that you can use to specify licensing, and for any Fair Use material we also need a source location or link; Just because you can find it on the internet doesn't mean you don't have to attribute it. If you need to go back and add them after the fact, like now, you can add either the {{self}} or {{Fairuse}} templates to indicate licensing information, and then just a link if appropriate for fair use stuff. - TarkisFlux 02:25, June 5, 2010 (UTC)

Thanks for letting me know about that, I am kinda new as far as wiki posting goes and I really appreciate the feedback I have been getting(even if it is just people telling me what I am doing wrong lol). If there is anything else wrong with my posting please let me know and I will try to figure out how to fix it. -- Antipathy 03:54, June 6, 2010 (UTC)

Did you want this template all prettied up as well, or would you prefer to just use the manual table like I finally remembered to finish over here? - TarkisFlux 01:28, August 16, 2010 (UTC)

It would be really sweet if Template:Armor Material Enhancements was fancy like the new armor template, but if it's too much work to get it working like that, then the "calculate it yourself" table will do fine. Heck, even if it was just a "plug in all the values" template without any calculating, that would be fine. --Ganteka Future 01:39, August 16, 2010 (UTC)

Done with wiki coding for a while. Have a really sweet Template:3.5e Armor Material Enhancements. It doesn't work for shields anymore, and I will do one for shields after the shield reformat. - TarkisFlux 05:53, August 16, 2010 (UTC)

hey man can you tell me why nothing on this wiki, no feats, no spells, no classes, no anything have refernces to the sourcebook they come from? it makes it very hard to track down and double check the rules to explain things to your DM. is there some sort of copyright issue? —Preceding unsigned comment added by Icewolf111 (talk • contribs)

As for sourcebooks as part of the SRD, those are limited to the books with Open Game Content in them (Player's Handbook, Monster Manual, Dungeon Master's Guide, Expanded Psionics Handbook and Deities and Demigods). Generally, anything relating to psionics is from the Expanded Psionics Handbook. Anything relating to epic levels (items, feats, prestige classes, spells) is likely from Deities and Demigods. Regular ol' feats, spells and classes are all just from the Player's Handbook. Other open game material should be listed as part of it's source, like everything in Unearthed Arcana. As for homebrew stuff, since that's all made by regular old folks, those aren't part of physically published materials. Does that clear everything up? --Ganteka Future 16:13, September 28, 2010 (UTC)

Appraise and a favor
The time and complexity of your thoughts about my skanders I would like to cordially thank for. I have no way of showing my immense gratitude but through the words here in. I have been unable to be on this website for many a moon, not being able to add to my work. Yet I would not want this to interfere with other users, nor would want your time to be waisted. So I would like to ask if I (or you), could merger my Skander with your DrawingBoard5 such that together they would be usable in games. My main conditions are to be at least a co-author and keep the Skandar name. What are your thoughts on this?

An Addition the Madness
Many of the things (like speed and slow heart beat) that you disliked in the Skandar's I have reworked (with your advice) and put onto my User:Franken Kesey/Uongo-mijusi (3.5e Race). Of which I would appreciate a glance at. Just as to see if the two show juxtaposition. It would hearten you to know that there is significantly more flavor shown in this race - that is only continued on this page. Thankyou guru of gurus. --Franken Kesey 18:51, September 30, 2010 (UTC)

re:Appraise and a favor
Let me start by getting all the information out on the table that I can muster for clarity purposes. User:Ganteka Future/DrawingBoard5 contains a quick example of what Franken Kesey should/could do for the skandar race. It's probably playable as is, but, there's still some flavor missing if I recall, since what was written for the "trobgubs" on the drawing board was just based off what I could extrapolate from the skandar, which itself was missing some information. As a note, the skandar has nothing to do with Skandar Keynes, but a lot to do with this skandar here. This puts me in an awkward spot for Franken Kesey's conditional request. The "trobgubs" are written by me, which, while based off the material written out by Franken Kesey is actually based off the creature from the Majipoor series. To me, that puts the "trobgubs" as an adopted article which was adopted from Franken Kesey if the references to "trobgub" are switched back to "skandar" and this was put as an actual article rather than just a sample thing.