Often, line of sight will be blocked by natural formations in the underdark. When the party is travelling great distances, it is not easy to tell exactly how far they can see. In these cases, the table below can be used to randomly determine spotting distances in varous types of terrain.

Many locations in the Underdark have a poor air supply. With the exception of the rare creatures which do not need to breathe, creatures and characters will be concerned about air supply in such places. Any area which is reasonably airtight can become stale or depleted.
In general, a medium-size creature depletes a 2-square cube every 6 hours (a 1.6 square cube every hour), while a small creature needs half as much and a large creature needs four times more.
Stale Air: Areas with half of the normal amount of air are treated as areas with stale air. A creature or character in a region of stale air must make an endurance check each round (DC 10 + 1 per minute). If the character fails a check, the character becomes dazed. The character cannot recover from this dazed condition until it reaches an area of good air.
Depleted Air: Depleted areas become deadly in a matter of minutes. See suffocation on page 159 of the dungeon master's guide. 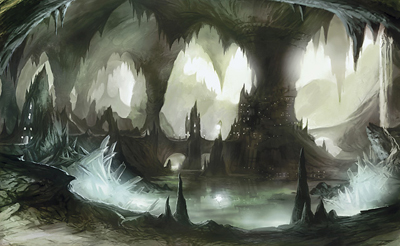 When moving through cramped natural tunnels, it is much harder to fight effectively. The following rules represent the dificulty of combat in cramped quaters (smaller than half a creature or character's space in hight or width).

Retrieved from "https://dungeons.fandom.com/wiki/Underdark_Exploration_(4e_Variant_Rule)?oldid=94826"
Community content is available under CC-BY-SA unless otherwise noted.