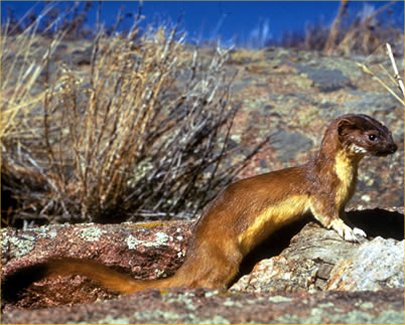 A slender creature jumps on you from an overhead rock and sinks its teeth in your flesh.

Memory Eaters adapted from weasel-like creatures, perhaps with a little help from evil Druids, although some sages speculate that Vecna might have had some thing to do with it -making sure some things "stay" hidden. however, most sages think the Memory Eater is a myth, undoubtedly thanks to it's Memory Lapse ability. They function like weasels, except they drain Intelligence in addition to their bite damage, and they are slightly more physically imposing.

Memory Eaters feed on Intelligence, and the empty husks of creatures it leaves behind usually attract similar carnivores.

More agressive than regular weasels, Memory Eaters regularly take on humanoids. They start the encounter with scanning the party, looking for likely (and yummy!) targets. After draining enough Intelligence, they disengage and dissappear, using their agile bodies to avoid capture.

Memory Drain (su): As a standard action , a Memory Eater can erase the memory of a specific target. This functions like the 'Eliminate' portion of the Modify Memory Spell, except that the spell can only erase the past five to ten minutes of a target's memory. Additionally, the target is "dazed" for a minute.

Retrieved from "https://dungeons.fandom.com/wiki/Thought_Drainer_(3.5e_Monster)?oldid=49461"
Community content is available under CC-BY-SA unless otherwise noted.