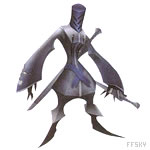 A Samurai with a distinctive cylindrical head that is a darker shade of grey than the most of the rest of its body. This head bears six diagonal slits on the front, three on each side. The majority of its body appears to be covered in a grey jumpsuit with bell sleeves and a lighter grey seam going down the front. Each sleeve has an emblem printed on them, and only the Samurai's black hands are visible. The black, featureless, pointed feet of the creature sprouts out from each of the legs of the jumpsuit. There is also a dark grey belt-like pattern that wraps around its waist, though it does not seem to have a purpose. The swords used by the Samurai usually just float very close to it, either crossing behind its back or resting at either of its hips.

The Samurai is a high-ranking Nobody controlled by Roxas. The shape of certain parts of a Samurai's body, particularly its legs, have a vague resemblance to the design of the Nobody symbol, and it can, like all lesser Nobodies, contort itself in normally impossible ways.

Samurai Nobodies do not attack very spontaneously. Rather, these Nobodies will remain calm and poised for a long while before sending a flurry of blade swipes at opponents. Moving slowly, but gracefully, Samurais wait for an attack before attacking themselves.

Back to Main Page → 3.5e Homebrew → Monsters
Retrieved from "https://dungeons.fandom.com/wiki/Samurai,_Nobody_(3.5e_Monster)?oldid=68353"
Community content is available under CC-BY-SA unless otherwise noted.