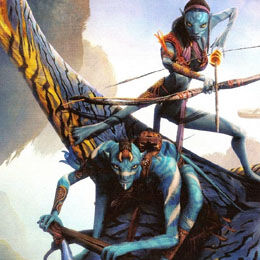 Summary: A rather tall race of Mary Sue Furries with plot armor. Na'vi have a special Bond with Nature, especially the animals.

The Na'vi are Native American stand ins. Their size belies their subtlety as they stalk their prey in absolute silence and with hardened determination. When they finally do catch their prey, they thank the animal for its sacrifice and pray for it. They bring their hunt back to the tribe and celebrate a successful hunt. They celebrate by singing tribal songs that glorify their legends and god, giving thanks. The Na'vi have a great love and respect for animals and Nature, to the point where they'd kill anyone for trying to cut down a tree nearby. Most often they ask why intruders have invaded their territory, before shooting them down with arrows.

They are humanoid in appearance and are 9 to 12 feet tall, having pairs of eyes, ears, arms, and legs like humans, as well as a nose, a mouth, and expressions recognizable to humans. The Na'vi differ from humans in having blue striped skin, pointed and mobile ears, large eyes, catlike noses and teeth, tails, and four fingers. While taller than humans, they have narrower proportions in body frame. The Na'vi also have a distinctive tendril feature protruding from the back of their heads, surrounded by hair (resembling a long braid), feeding directly into the brain. This organ, known as a queue, allows them to connect with the biology around them, transferring electrochemical signals such as thoughts and memories to the trees, plants, and other creatures. It also acts as their genitalia In other words, the Na'vi screw with their hair. They also tame animals by force with their screwing hair and keep the hair in the animals while they ride. In addition to being furries, the Na'vi are also into rape and bestiality.

They are what many cityfolk consider savage, flea-bitten blue monkeys. The cityfolk are right. Tribes in the jungle consider them to be efficient and effective hunters. They are often hostile to any who would harm Nature. As such they do not get along well with other races; unless the other race has proven themselves in some way, gaining the respect of the Na'vi. Relations with humans vary from shooting to kill on sight, to allowing them into the village to discuss trade with the chieftain. Unfortunate every time a human is brought to discuss trade, he has sex with the chieftain's daughter then passes out. The elves of the forest have the respect of the Na'vi, the elves natural grace and will to protect the forest wins them a natural ally and potential friend in the Na'vi. Also, both races are total Mary Sues, so of course they get along swimmingly. Dwarves and the Na'vi don't really interact that often, so the Na'vi treat dwarves like any other intruders. The few times Dwarves are forced to interact with the Na'vi is when looking to mine Unobtanium, which often resides underneath Na'vi trees. Watch the movie to see how that turns out. Orcs of any kind, including half-orcs, are most often shot on sight, because Orcs are evil and the Na'vi are oh so pure, so Orcs and the Na'vi never get along. Realistically, Orcs would absolutely destroy the Na'vi in warfare, but then so would almost any other race. Halflings are seen as very clever and respected for their natural subtlety, but often distrusted by the Na'vi; this doesn't make them an enemy but not quite an ally either. Fortunately Halfing's are usually too drunk to notice. The Na'vi are indifferent about the gnomes; the Na'vi will unlikely attack a gnome, unless they are tearing the forest apart they will be left alone or their goddess tells them to. Half-elves are treated with respect to an extent, because they are half-elven. Their exact treatment depends, in equal measure, upon the tribe's relations with nearby human settlements.

Often Neutral Evil due to their strong Bond with nature and their unreasonable savagery when protecting it, and because they literally rape their mounts into submission every time they link their hair tendrils to them. Because of this the Na'vi often take up the mantles of barbarians, rangers and even druids.

The Na'vi tribes can be found in a remote area usually distant from civilization, in the wilds. This can be in a giant tree in the jungle, a village of huts on the plains, caves on a cliff-side, etc. They choose to live in these places so that civilizations can't and won't disturb them. The Na'vi will have a sacred area, often a set of trees or plants near their tribal community, that contains the history/memories of their ancestors. The memories can be accessed by Tsahaylu, 'The Bond'. The Na'vi tribes guard these areas with their lives; should any outsider approach the area, they are to be shot and killed. The tree has a massive amount of rare Unobtanium underneath it, leading to constant conflict with Humans, Dwarves, and any other race who wants to actually use the mineral instead of just letting the lanky cat monkeys do absolutely nothing with it.

The Na'vi people all worship one deity; an entity that they consider to be Nature incarnate called Eywa. It is Eywa they thank for a successful hunt; Eywa they pray to in troubled times. Eywa is known by the Na'vi to keep the balance of Nature; no overpopulation, no underpopulation, same with hunting, farming, and etc. It has been theorized by psions that Eywa is a powerful psionic consciousness; simply choosing to remain hidden and communicate in subtle was to the Na'vi and wildlife through their queues or the natural psionic energies. The reason for this is unknown. The Na'vi say that Eywa can be heard and spoken to through the Tree of Souls. The Tree of Souls is often a single tree guarded and hidden by a Na'vi tribe. The Tree of Souls has counterparts, similar in appearance but often smaller and found in greater numbers. These trees are where the Na'vi make their sacred lands.

The few Na'vi who bother to learn Common tend to speak it with a some-what thick accent. They also speak the language of the wild Sylvan, because of their strong bond with Nature. The language they speak most often though is their own, Na'vi.

All Na'vi are a bunch of Mary-Sue cretins and deserve to be nuked from orbit. Now, get me my coffee. Col. Miles Quaritch

The Na'vi are given names at birth and may earn a second name, often describing their talent, after passing their birthright. Males: Tsu'Tey, Eytucan, Eyktan, Akwey, etc. Female: Mari, Suu, Pocahontas, etc.

Community content is available under CC-BY-SA unless otherwise noted.
Advertisement