In the Dungeons & Dragons fantasy roleplaying game, the hell hound is a hyena-like creature which can breathe fire and hunts in packs. It is classified as an outsider from the Nine Hells.

The hell hound was introduced to the game in its first supplement, Greyhawk (1975).[1]

The hell hound appears in the first edition Monster Manual.[2] The Monster Manual was reviewed by Don Turnbull in the British magazine White Dwarf #8 (August/September 1978). As part of his review, Turnbull comments on several monsters appearing in the book, noting that the breath weapon of the "much-feared" hell hound has been altered from its previous appearance.[3]

The hell hound appears in the fourth edition Monster Manual for this edition, under the Hound entry.[5]

A hell hound resembles a mangy, skinny, somewhat demonic hyena-like creature with red eyes and draconic ears. It has the ability to breathe fire. They are alternately depicted in Fourth Edition as nearly skeletal canines wreathed in flame.

The hell hound enjoys causing pain and suffering and it hunts accordingly. A favorite pack tactic is to silently surround prey, and then cause two hell hounds to close in and make the victim back into another hell hound's fiery breath. They will attack with their claws and teeth if they have to. If the prey manages to escape, the hell hounds will pursue it relentlessly. Hell hounds are also quick and agile.

Another type of hell hound is the Nessian warhound. Nessian warhounds are coal black mastiffs the size of draft horses, and are often fitted with shirts of infernal chainmail.

The hell hound was ranked ninth among the ten best low-level monsters by the authors of Dungeons & Dragons For Dummies. The authors described them as the "first serious representative of a class of monsters your players will be fighting against for their whole careers: evil outsiders," and that they are interesting because they "introduce players to monsters with an area-effect attack (their fiery breath)."[6] 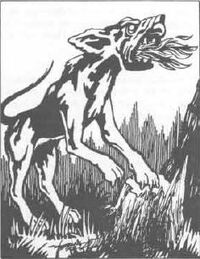 Retrieved from "https://dungeons.fandom.com/wiki/Hell_Hound?oldid=100624"
Community content is available under CC-BY-SA unless otherwise noted.