[[Summary::Androgynous and charismatic half-breeds of humans and lunars.]] 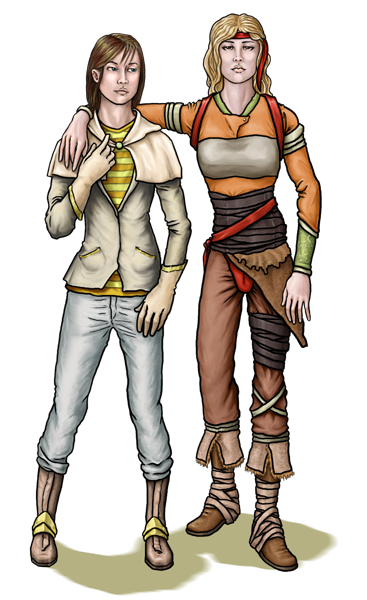 Evil half-lunars are cold and effective. They often show apathy but maintain a chilly disposition. They rarely act of pure spite, instead following a greater goal. However, like all races (especially humans), they tend to follow their emotions which often guides them through several types of behavior.

Half-lunar is a humanoid race and quite similar to humans. Half-lunars of both genders have a very similar physical profile. An average half-lunar tends to be around 5'6" high with females being just slightly taller and thinner than males. Both genders are ambiguous in appearance, half-lunar males are feminine, lacking most masculine traits such as broad shoulders. Females lack womanly curves and appear tomboyish. In fact, both genders are nearly identical at first glance. Half-lunars also draw physical traits from their lunar parents. They tend to be quite slender with fair skin. Peculiarly, mostly among spellcasters, strange sigils appear on their skin under the moonlight.

Half-lunars most commonly have black, brown, white or blonde hair. However, the race shows a great diversity in hair color, and practically any color hair is possible. They usually have brown or blue eyes with other colors being very rare.

Half-lunars have thinner frames than humans. Their small ribcages compress their vital organs, although not enough to cause them health problems. Half-lunars also have smaller, less efficient organs, making their daily lives more difficult. Sexual organs are also affected by this trait. Half-lunars have a low fertility rate, especially among females.

Their natural affinity for magic has ensured their survival as a race, although most half-lunars are born and raised in human communities.

Half-Lunar have good relations with both humans and lunars and they are also sociable enough to have good relations with many other races. They do not try to avoid other races and live among them rather well. Half-lunars are social folk and they often gather large circles of friends. Although some prefer a smaller circle of closer friends. Races able to see through illusions naturally attract the distrust of half-lunars, a genetic trait from their lunar mother (using illusion to remain unseen in society).

Half-Lunars gravitate toward a lawful alignment, many half-lunars are neutral on the good-evil axis thank to their racial carelessness. Lunars usually have honor and respect for the law, but many are also attracted to neutrality thanks to their wanderlust. Overall, half-lunars are rarely chaotic, but more half-lunar are neutral than lawful.

Half-lunars in groups tend to create communities around the use of spontaneous-casting magic, the stronger the spell you cast, the bigger your share of the taxes. Half-lunar communities are very different from each other:

Half-Lunar faith is as diversified as humans. They often go with the human's gods or lunar's ancestral worship. Lunars raised by humans are likely to worship human religious deities. Half-lunars tend to adopt other race's spirituality into their own. Thus every half-lunar is said to possess his own religion. Half-lunars are very spiritual, far more than typical humans. Many of them wander the land in search of a higher calling or to enrich one's spirit, not unlike full lunars.

Half-lunar communities are likely to adopt the neighboring human community's beliefs. However, some half-lunars worship the lunar race as a whole. Often, they may gather around a lunar artifact, and using it as an object of worship.

Half-Lunar speak both Lunar and Common. They may learn any other language and thanks to their human adaptiveness and lunar wanderlust heritage, half-lunars tend to be versatile with languages. A half-lunar innately knows lunar; they never need to learn it.

Half-Lunar are usually named by their human parent, since lunars don't tend to stick around. However, half-lunar exclusive cultures tend to develop strange names based around their lunar heritage.

Half-Lunar spell-like ability increase to be equal to the half-lunar's HDs.

2nd Generation Half-Lunars Traits (Ex): These traits are in addition to the half-lunar traits, except where noted.

Psionic Half-Lunar Traits (Ex): These traits are in addition to the half-lunar traits, except where noted.

Retrieved from "https://dungeons.fandom.com/wiki/Half-Lunars_(3.5e_Race)?oldid=96782"
Community content is available under CC-BY-SA unless otherwise noted.