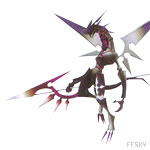 A thin, dragon-like creature with silver and purple skin drops from the sky. Its hands only have two distinct digits, while its feet have three long, purple toes each. It also has a thin, purple tail and sharp, white wings with purple tips lined by spikes. Its "face" seems to be a small, black area in what seems to be its neck, while its draconian "head" acts as something of a helmet. This "helmet" sports a jagged, open mouth at its end, lacks eyes, and is lined by thin spikes. Its upper body and "neck" are covered in magenta straps. There is also a white sigil on its left thigh.

The Dragoon is a high-ranking Nobody controlled by Xaldin of Organization XIII. Dragoons are one of the most powerful Nobodies, and like all Nobodies, Dragoon's have astounding levels of flexibility. It wields a long lance as a weapon.

When they appear, they drop directly to the ground, causing damage. A reflex save of DC 15 is required to avoid the shockwave attack or suffer 1d6 of force damage. They use the Dragoon Jump attack constantly, and it can make fighting difficult.

Dragoon Jump (Ex)-->: The Dragoon's favored ability, it mimics its entrance by teleporting above the party and slams down hard with its lance 5 ft. away from the party sending out a 15 ft. shockwave that does 1d6 + the Dragoons dex modifier with a relex save of 15 for half. In addition to the damage those who fail the save are also dazed for one round. Nobodies are immune to this attack.

Back to Main Page → 3.5e Homebrew → Monsters
Retrieved from "https://dungeons.fandom.com/wiki/Dragoon,_Nobody_(3.5e_Monster)?oldid=68896"
Community content is available under CC-BY-SA unless otherwise noted.