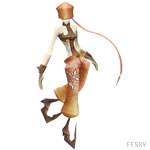 A feminine figure seems to glide toward you, wearing pink bell-bottom pants with a white symbol printed on one leg. It also has a pink beenie-like hat on that covers where its eyes would be, with a long, pink, braid-like growth sprouting from under the cap. It also seems to be wearing dark, heeled boots with toes that point up at sharp right angles, as well as dark bracelets on each wrist, both with a small spike on them. It also has dark armor that covers their chests. This armor is worn somewhat like a halter top gown, as it exposes the Dancers' shoulders and terminates in a collar. Its hands lack fingers and its mouth looks to have been sewn on into a permenant, eerie grin.

The Dancer is a high-ranking Nobody controlled by Demyx of Organization XIII. Dancers move quite gracefully, gliding across the ground while their feet glow pink.

The Dancer has a very effective fighting style. It will kick vigorously for an extended period of time. Each kick sends the foe a few feet into the air. The most deadly attack comes when the Dancer is sliding with glowing hands, called Dancer's Kick; if one touches an opponent while doing this, the dancer grabs them and jerks him around in a dance before kicking him for high damage. They are difficult to defeat in large numbers. Another attack is that the Dancer will grab the foe by his head, skate around, and fling him into the air, this attack is called Dizzy Dance. The Dancer also has the ability to Flurry, but only into its regular attacks, and cannot Flurry after using its full-round Spinning Kick attack.

Dancer's Kick(Ex)-->: If the Dancer makes a successful grapple check, as a swift action they may Hard Kick the opponent as if they had rolled for Critical.

Dizzy Dance (Ex)-->: If a Dancer starts a round with an opponent grappled, they can make another grapple check to deal 2d8 of bludgeon damage. The foe is also dizzy for 1 round.

Back to Main Page → 3.5e Homebrew → Monsters
Retrieved from "https://dungeons.fandom.com/wiki/Dancer,_Nobody_(3.5e_Monster)?oldid=68982"
Community content is available under CC-BY-SA unless otherwise noted.