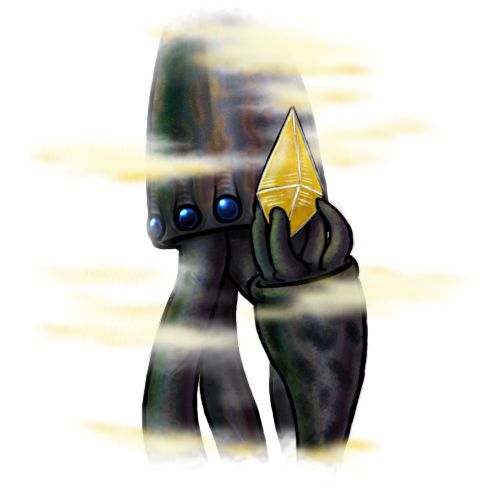 Above being a game, Dungeons & Dragons is a work of fiction, told in part by the DM and molded by the choices and personalities of the characters and players that populate it. Being a story formed by a group in a cooperative act, this game offers fantastic opportunity to delve into moral and ethical choices as escapism. As Complete Xeno takes us into the territory of science fiction as a backdrop, it still maintains its thematic roots in fantasy genre fiction. Dungeons & Dragons, after all, is a world filled with magic. This remains the theme of appilons, as their world has less technology and a strong reliance on whimsical forces and abilities. Adding appilons to other Complete Xeno material may turn that concept on its head, providing a whole new slew of options and ideas to explore.

A Dungeon Master should be well versed in the themes and materials at his disposal to help set the stage for his players. The information provided here will help him with that task and hopefully enrich everyone's gaming experience.

They are cone-shelled alien creatures supported by four long tubular limbs. A dozen eyes ring their shell and a four-part beak allows them to speak. Intelligent, caring and communal, appilons are often the good guys.

Appilons, while quite alien, thematically fit between standard science fiction and fantasy fiction in a genre known as science fantasy. With a low-level of technology, exploration of the self, themes of survival, destiny and purpose,

Appilons come in two castes, each with its own paragon class.

Introducing new material to your game can be easy, but should be done thoughtfully and with consideration to the thematic impact. DMs, be sure to read all relevant materials before finalizing a decision.

This material is intended to fit mechanically alongside moderately powerful characters of the wizard and rogue balance ranges in accordance to the Balance Points of this site.

Notes on design philosophy and power plus comparison to existing material.

They are the caring grandfather, the good uncle, the close family friend and the confidante.

NPCs build first impressions of a race, allow players to see how they act within the game, and allow the DM to make the choice of whether to allow appilons as PC characters (to test their mechanics and flavor).

Appilons are intended to be introduced as fully leveled in their respective paragon classes when on their homeworld of Messos Myonel. While it may be unusual for a race to be populated by higher-level characters and completely forgo the typical NPC classes, the environment of Messos Myonel demands it. PCs likely won't be ready for adventures on Messos Myonel until 6th level at the very earliest (with proper supplies and preparation).

Goodly, friendly or helpful appilon NPCs are likely to take on roles such as the "caring grandfather", "good uncle", "doting mother", "trusted family friend" and "confidante", as far as personalities run, rather than their combat ability. Appilon mental attributes are generally higher than typical humans, and their behavior is reflected as such, speaking bits of wisdom, solving problems, or being the focus of attention.

Antagonistic appilon NPCs are likely to be daring menaces, though alignment aside, and as with any well developed villain, it is important to establish proper motivation for an antagonist's actions. Alienation from his people, civil injustice, betrayal and a sense of entitlement are all likely causes for an appilon to lash out at the world around him. Even a simple misunderstanding among cultures can result in PCs coming to odds with appilons.

When PCs helm playing a race that can be potentially foreign to the other players (if they haven't familiarized themselves with the material presented here), in can make for interesting roleplaying, as well as establish how your group is likely to view all members of the race, as their interactions and memories will likely be the strongest when weighed against their interaction with NPCs. PCs are encouraged to take hold of the material here and add their own style to it. Flavor isn't cemented and can be changed easily to suit your needs and the needs of your group's play-style.

As you probably read above, appilons are a single race split into two variations. The base of each version is similar, but their paragon classes are drastically different. Agiishells focus on mental abilities and casting or manifesting special powers while ortshells focus on their physical nature. When not advancing in their recommended paragon classes, appilons can take any class the qualify for. An agiishell cannot take the ortshell paragon class and vice-versa.

Religion is rather everpresent in appilon culture. Though, religion is less like that of a humanoid religious devotion. Religion for appilons is a connection to family, knowledge, home and history. They worship the Anagii, the collective spirit of both the living and departed.

Appilons praise their cultural deific consciousness. They seek guidance and greater understanding through their community and connection to others.

Appilons, for their great intelligence, lack any technology above basic tools and amenities. While they are capable of crafting tools of metal, they rarely do so. Not needing to go to war, and capable of surviving without relying on technology as a crutch, appilons have gone without. In their harsh world, they are often in need of equipment for exploring and traversing the landscape as well as weapons to defend against dangers such as battleheads.

Their weapons are typically modified tools, such as picks and hammers, originally prepared for digging and mining. As there isn't "wood" on Messos Myonel, most of these implements are either metal, crystal or shell harvested from battleheads.

Their armors are most often heavier sets, as materials like leather are likely to be eaten by the acids on Messos Myonel.

However, on the flip side, they do employ magic. Most notably, they employ divinations to secure their communities and warn against dangers both near and far off into the future. These divinations are used as defensive tactics rather than for aggressive battle strategy.

Appilons hail from a far-off world. Their star, mighty Olum, shines its radiance upon their world and the worlds nearby.

The appilon home-world is harsh and dangerous for the unprepared. It is not a world humanoids find comfortable.

Introducing a new planet to your game can raise some questions. Primarily, depending upon your setting, the folk of that world might generally not be aware of what a planet is, the vastness of the Material Plane and general astronomy. Once you go through the initial confusion or exposition, and the PCs actually get to travel to other worlds, it's mostly like planar travel, and indeed, Messos Myonel is much unlike the traditional worlds of DnD and more like a far off planar location. Weird creatures, vast desolations of harsh weather, a crushing presence of atmosphere and a constant struggle to survive, Messos Myonel appears quite hellish. Though, this world presents a variety of adventuring options, exotic treasures and peculiar knowledge and secrets.

It is important to note that when introducing an alien world, that there should be some sort of grounding factor to allow the PCs to understand their surroundings quickly. A vivid storytelling DM can paint quite an image of the world to bring it alive, noting the color of the sky, the feeling of the air, the smells, the sights and the moons and stars the sky. Once the PCs are aware of their surroundings, a DM can begin to move along with the events at hand.

The scope of the Material Plane isn't limited, of course, to a single world, and likely when using material from Complete Xeno, your game won't be so limited either. From interactions with humanoids to other aliens, appilons may find a welcoming hand with allies in the greater world around them, or a dangerous foe that seeks their annihilation.

In general, appilons are "the good guys", and attempt to get along peaceably with others. However, they may come to blows with others. Appilons readily band together with their own kind when they face outside threats.

In the event of a global war, appilons prefer to maintain defensive priority, rather than taking the fight to their aggressors. A land war on Messos Myonel is a difficult undertaking for other races, as the world itself is harsh enough that low-level troops are useless to the point that the planet may claim their lives within mere rounds of their arrival. It is also said that the planet itself is protected by The Ark. Any such epic-styled wars should be thought out in advance for concerns of all involved parties by the DM to ensure as believable an outcome as possible.

Retrieved from "https://dungeons.fandom.com/wiki/Complete_Xeno_(3.5e_Sourcebook)/Appilon?oldid=79729"
Community content is available under CC-BY-SA unless otherwise noted.