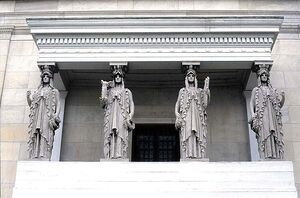 Nominated for mass deletion along with 22 other D&D articles at Wikipedia:Wikipedia:Articles for deletion/Death watch beetle (Dungeons & Dragons)

In the Dungeons & Dragons fantasy role-playing game, the caryatid column is a type of construct in the form of a column carves in the likeness of a female. The creature's name comes from a type of real-world statue called a caryatid.

The caryatid column appears in the third edition Fiend Folio (2003).[4]

A caryatid column is very similar to a golem. As with golems, the caryatid column is an artificial construct animated by magic. A caryatid column appears as a column with fine carving in the shape of a woman holding a sword. When activated, (typically by an event trigger), they transform into "young maidens" and do battle, returning to their original position and state once the threat has been dispatched.

The caryatid column appeared in the Tome of Horrors (2002) from Necromancer Games.[5]

Retrieved from "https://dungeons.fandom.com/wiki/Caryatid_column?oldid=96804"
Community content is available under CC-BY-SA unless otherwise noted.