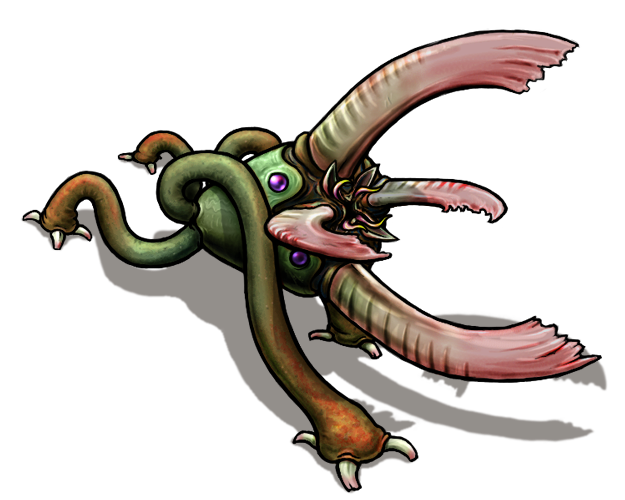 Battleheads are cunning and patient beasts, holding still in sands and gravels, waiting for prey to happen along. Battleheads burst out of the ground and ambush their prey, using their dead magic zones to hinder any counter measures. With some sense of preservation, battleheads prefer to retreat from a fight than risk their death. If an ambush fails within the first couple rounds of the attack, a battlehead will withdraw, often burrowing away to safety.

The top predator on Messos Myonel, they hunt stray appilons and any other prey worth catching. Highly aggressive, they exhibit tactical reasoning beyond what their intelligence might suggest, always being careful to attack clever appilons, retreating to tend to wounds, or tracking prey across long distances with their keen senses. They employ their powerful pincers, dead magic zones and ambush tactics, singling out foes. Battleheads often lurk in sand, but occasionally, packs rove caves in search of food. Like all complex life on Messos Myonel, they can feed off of minerals and microorganisms to sustain themselves, but prefer meat.

Environment: Native to Messos Myonel, battleheads are found throughout the planet's surface, as well as underground in cave systems, though they prefer being above ground where loose sand and scree is most common for hiding. Occasionally, a battlehead will find its way into water, often to escape surface storms, where it can hold its breath for hours as it scuttles along the bottom. Battleheads are poor swimmers and prefer to walk along the bottom of bodies of water, where they hunt for aquatic prey.

Typical Physical Characteristics: Battleheads have four main features to their body: a shell, four pincers, a four-part beak and four limbs. They have a hard, cone-shaped shelled body with four dome-like glassy eyes of a dark bluish color. Their shell ranges from greens to browns, grays, rusty reds and pale yellows. From the front of their head jut four large pincers, a pair of large pincers and a pair of small pincers that pinch shut within the arc of the larger pair. In the center is a four-part beak, with each part having a long, rasping and brightly colored tongue. From the narrow end of their shell, four long, muscular limbs protrude, keeping the creature ambulatory. Each limb ends with four blunt, hard nails used for digging and gouging prey.

Alignment: Battleheads hunt for food, and much like animals, they are neutrally aligned. They typically lack the outlook on their world that suggests anything other than survival as a means of taking action.

Stories are told of battleheads gathering in large numbers and laying assault to traveling caravans and small villages. Such tales are rare, but serve as warning. While battleheads aren't the brightest of beasts, they do tend to coordinate, typically under the loose command of an older and larger battlehead.

Battleheads sharpen their pincers on crystals, chipping off pieces as they grow too large or become blunted after a fight. Their pincers are much like crystal and stone, rather than bone, and when chipped, leave a very sharp and strong edge.

Reproduction: Battleheads in mating season tend to become nuisances, as they tend to become highly aggressive and free-roaming. Wandering battleheads will often try to settle into prime areas inhabited by other creatures that they wish to prey upon. In this state, a battlehead may simply kill to mark its new territory and not eat its prey.

Some battleheads hole up in the same territory for long periods of time. The trash of their kills tends to pile up around them. Occasionally, these bits of treasure will be used as lures on the surface to draw in prey eager for a prize.

Battleheads don't often live long enough to reach full size, but those individuals skilled enough, lucky enough or rugged enough grow into fearsome beasts that are the terror of the lands they stalk. Such creatures are highly reclusive and don't risk unnecessary confrontation. However, such beasts are also highly confident and aggressive. They lay in wait for their prey to come to them, often near areas of key resources where travelers must frequent.

Retrieved from "https://dungeons.fandom.com/wiki/Battlehead_(3.5e_Monster)?oldid=79852"
Community content is available under CC-BY-SA unless otherwise noted.