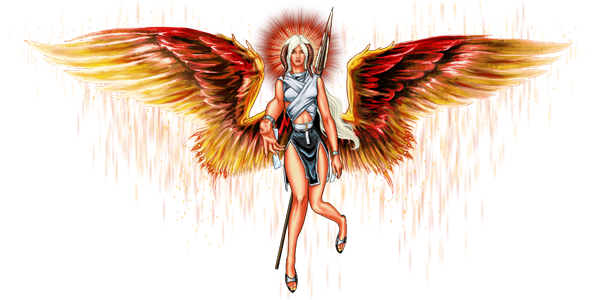 Summary::These outsiders are born of a fusion of fiendish and celestial bloodlines. Asutas are the blended and bonded essences of fiends and celestials created in the hopes of giving rise to an outsider with the free will of a mortal. Perhaps originally created through bizarre arcane rituals or the tinkering of a curious deity, their origins are lost to the ages, long being their own distinct race. However, both of these methods have been used in more modern ages to recreate asutas from base components.

The asuta is designed for use with the Asuta Paragon (3.5e Racial Paragon Class).

Despite the dualistic nature of their heritage, and the suspicion and mistrust they often garner from other outsiders, asutas often have achieved personalities, well settled in their lives and able to pursue reflection and personal advancement toward their own goals. However, as outsiders with no set place to call home, many asutas have since been recruited to work for the machinations of deities (frequently Death domain deities and neutral deities). Their ever-conflicting but "balanced" bloodlines make them suitable for pursuing morally ambiguous goals, a task they relish to reveal more who they are and where they might belong. Unlike common folk with better sense to avoid stress and trouble, asutas often pursue situations that put them under duress for the purpose of revealing their true natures (and occasionally, their more dominant bloodlines).

A newborn asuta reaches adulthood within a single year, at which point they age according to the information in the tables given below. Such rapid growth leaves little for childhood development, often leaving many with a desire to follow orders for much of their younger years, leaving the tough decision-making to others until they are more comfortable with themselves.

Asutas stand at around six and a half feet tall and weigh in at about 190 pounds. For the most part, they appear as idealized humanoids, muscular, trim and attractive, though most also show traits of their two bloodlines. The dominance of their bloodline not only manifests itself in their appearances, but in their personalities as well. These celestial and fiendish traits may change over time, or even suddenly if they experience a drastic change of heart. They always have wings, but these wings vary greatly. Most commonly, these wings are dark gray and red feathered wings. Only mature asutas, who have undergone training, are able to make good use of their wings.

Those asutas that favor their celestial bloodline may have golden skin, gossamer-like hair, shimmering pale emerald skin, sparkling eyes, silver nails, angelic feathered wings, or some other sign of their higher nature.

Those asutas that favor their fiendish bloodline may have dark scales, horns, tendrilous beards or hair, glowing red eyes, dark nails, black tusks, bat-like wings, a fetid odor, or some other obvious sign that they are composed partly of evil.

Their appearance shows little effect of aging, usually a dimming of hair and eye color as they reach closer to their "maximum age". They maintain a mature yet youthful appearance up until their eldest years. As asutas are mortal-like outsiders, they do have a sort of maximum age. Upon reaching this age, they naturally undergo a revivification process and revert to their young adult forms. Often, this process changes other aspects of their appearance and personality.

In the attempt to better understand life, asutas pursue the understanding of death and the mortal condition associated with it, being souls and passing onward, reincarnation and final destinations. As asutas may often be agents of the machinations of gods, most humanoids tend not to trust them, or at the very least, understand and relate to them. Most outsiders manage to get along fairly peaceably with asutas, being that they are a neutral party and might even be forced to get along with them, lest their deific master reign down punishment among all his followers.

Asutas, unusually and despite there innate evil essences composed within them, have a knack with animals, a trait that often helps them to gain the trust of common folk.

While most asutas are neutral, their dualistic bloodlines make them a vastly aligned race, and may be of any alignment. Many asutas change alignment throughout their ages of living, rarely settling on a single alignment for more than the age of a man.

Asutas are tough and able to live just about anywhere they might need. Most commonly, when not within deific palaces or barracks, they are found among diverse populaces, trade towns and frontier fortifications where planar creatures congregate. Asutas are found throughout the many planes.

Since asutas are often in the employ of deities, they praise their masters as they would kings and queens. Deities are for them to respect and provide their servitude for, not worshipping. However, there are free-roamning asutas, who are free to choose what power (if any) they revere. Some asutas tend to look to specific deities as parental figures, though they may not share the same alignment, as parents and children don't always get along.

An asuta is raised to know Abyssal, Infernal and Celestial. Occasionally, they'll combine these languages into a pidgin language typically referred to as Asuta, a word common to these languages meaning roughly "the coming together of that which has long been separated" or "a convergence of the diverged" which also describes the race in general and why it is their given name. Whether the word came to be in all the languages before or after the appearance of the race is speculative gossip.

In the scope of naming conventions, the history of asuta names is a rough guess at best. As beings in touch with many civilizations across the planes, asutas have a wide variety of kinds of names, ranging from celestial to fiendish, mundane to eldritch. Below are a few examples of names an asuta might have. Some have many names, while others might have only one.

Retrieved from "https://dungeons.fandom.com/wiki/Asuta_(3.5e_Race)?oldid=81792"
Community content is available under CC-BY-SA unless otherwise noted.