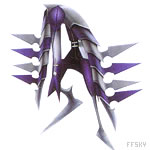 A vaguely humanoid figure, covered in a purple and silver bodysuit is walking toward you. Its segmented arms are each lined by four blades resembling spikes. Both the blades and segments they are on alternate from silver to purple. It occasionally uses its arms as "wings" to glide through the air. It appears to have a long tongue hanging from its mouth, which is mostly silver with a purple tip emblazoned with a small, white symbol.

The Assassin is a high-ranking Nobody controlled by Axel of Organization XIII. Assassins possess the same dumbfounding flexibility as all Nobodies.

Assassins spend a lot of time in the ground. Then they attack by flailing wildly. They can use their Fail-Safe ability if their HP gets too low.

Fail Safe (Ex)-->: The Assassin must make a successful grapple check. If the grapple is successful, the Assassin explodes causing DC 10 + 1/2 HD + the Assassin's Con modifier of force damage. If the Assassin does this, the party does not obtain exp for defeating it.

Back to Main Page → 3.5e Homebrew → Monsters
Retrieved from "https://dungeons.fandom.com/wiki/Assassin,_Nobody_(3.5e_Monster)?oldid=68227"
Community content is available under CC-BY-SA unless otherwise noted.