This chapter explains how spiderkind can be used in a campaign; both as simple monsters and as the theme of an entire campaign. It also give rules for exploring the underdark; the ultimate site for spiderkind adventures. Finally it presents some example NPCs which can be adjusted for your campaign, used as extra party members or even played as PCs for players.

The easiest way to use spiderkind creatures is in the same way as any other monster. It is a simple matter to add a small spider colony to an existing dungeon or to have a group of ettercaps and chitines (with spider pets in tow) ambush the party in the middle of a forest. If you use spiderkind in this way, it is generally best to avoid the more intelligent spiderkind (such as draegloth, drow and driders, but not including chitines and ettercaps), as these are better suited to the role of masterminds. It is generally not a good idea to use drow once and not follow it up, as drow are usually involved in grand schemes. A possible exception to this is a simple drow surface raid; though a raiding party disappearing without trace may bring dark consequences from below ground...

The easiest way to base a campaign around the spiderkind is via the drow. The drow are master schemers, using many-layered plans, tricks and deceits to achieve their goals. The drow have many spiderkind followers, and even a spiderkind deity that almost every member of their race follows.

However, building a campaign around the drow is no simple task; a simple plotline in which the PCs work for Arachne against the followers of Lolth will rarely suffice, as the vast majority of players will not follow a spider deity simply for plot line reasons. You will therefore need to think of a good reason for the PCs to go up against the drow.

If one of your players does follow Arachne, you will need to be careful that you do not centre the campaign on that player. The aforementioned player will not need any further hook than the simple “Arachne has asked you to deal with the drow threat”, but your other PCs will probably need a more complex hook. If you have a group that all follow Arachne, your hook should be fairly straightforward, though the drow should make the first move; evil masterminds are not as effective if they are the one on the defence.

You may wish to build a campaign featuring the PCs as followers of Lolth. In this case, you can build the campaign around the dangerous game of subterfuge that all drow play. Alternatively (as an interesting twist), you could force the followers of Arachne and the followers of Lolth together as mutual allies. Maybe the spiderkind have come under risk of extinction, and only in unity can they survive.

Often, line of sight will be blocked by natural formations in the underdark. When the party is travelling great distances, it is not easy to tell exactly how far they can see. In these cases, the table below can be used to randomly determine spotting distances in varous types of terrain.

Many locations in the Underdark have a poor air supply. With the exception of the rare creatures which do not need to breathe, creatures and characters will be concerned about air supply in such places. Any area which is reasonably airtight can become stale or depleted.
In general, a medium-size creature depletes a 2-square cube every 6 hours (a 1.6 square cube every hour), while a small creature needs half as much and a large creature needs four times more.
Stale Air: Areas with half of the normal amount of air are treated as areas with stale air. A creature or character in a region of stale air must make an endurance check each round (DC 10 + 1 per minute). If the character fails a check, the character becomes dazed. The character cannot recover from this dazed condition until it reaches an area of good air.
Depleted Air: Depleted areas become deadly in a matter of minutes. See suffocation on page 159 of the dungeon master's guide. 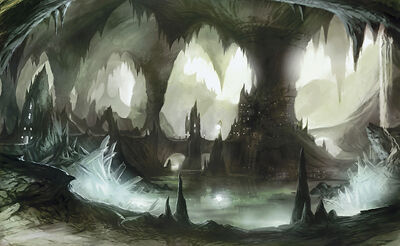 When moving through cramped natural tunnels, it is much harder to fight effectively. The following rules represent the dificulty of combat in cramped quaters (smaller than half a creature or character's space in hight or width).

This section presents some example NPCs which can be used in a spiderkind themed adventure or campaign. They are fully stated out characters, so they should be adjusted before being used as simple NPCs, but they can be used as extra party members or even PCs.

You can apply the arachnomancer and spider rider classes as a template for NPCs, using the process for applying class templates described on page 182 of the Dungeon Master's Guide.

Back to Main Page → 4e Homebrew → Sourcebooks → Arachonomicon; the Book of Spiderkind

Retrieved from "https://dungeons.fandom.com/wiki/Arachonomicon;_the_Book_of_Spiderkind_(4e_Sourcebook)/Campaigns?oldid=47726"
Community content is available under CC-BY-SA unless otherwise noted.