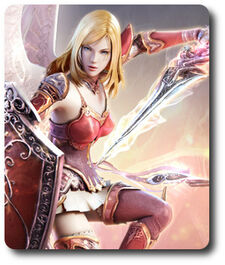 Pronounced (r-eis-yan), they are an unique race of elven lineage. They resemble high elves with pink skin tones and reflective golden hair. The Ar'Eisyyan are a evolved breed of elven lineage who hail from the Crystal Sky-Continent, "The Crystal World". Using their ability to summon and sculpt anything from gold metal they have created a small floating world upon which to live in peace.

The home of the Ar'Eisyyan appears in the morning sky only briefly as it drifts among the clouds at an elevation thousands of meters above the ground. Hidden from the world since their very creation these peoples have remained distant from earthy cares. Here in their secluded world they live and die detached from the worries of the world below.

Ar'Eisyyan possess the natural emotional range of humans. However their lifestyle is very tempered, somber, artistic, and self-disciplined. They are often very mellow and quiet even in the best of social atmosphere's. Violence is not favored among their kind since their tempers are extremely mild. If a conflict cannot be resolved then it is often settled over a game of chance. They call this perspective of winning or losing by simple chance, "The Crystal's Fate".

This perspective of conflict resolution does not extend to other races however. The Crystal World is often attacked by outside influences such as Powerful Dragons and Elemental Archons. For this very reason a new caste of society was created called the Red Caste. Increasing the number of castes to three has had a tremendous impact on their culture recently as they develop more aggressive tendencies toward security and defense. They remain a pleasant people none-the-less for peaceable travelers and visitors.

The Ar'Eisyyans live high in the clouds on a sky continent called, "The Crystal World". Do to their solitary lifestyle the Ar'Eisyyan have few formal relations with the world below. Members of the Blue Caste however, seek to learn as much as they can about the natural world and her races. This is part of their formal training and study. They currently show little interest in the diplomatic affairs of others as little of what they do ever affects their way of life.

Many foreigners often find their way to the Sky-Continent and have difficulty spreading new ideas, beliefs, or practices amongst the Ar'Eisyyan. This is because the Ar'Eisyyan believe that the lifestyles and practices of the foreigner's to be unnatural among their race. Not surprisingly, perhaps the most disgraceful and dreaded of all terms used amongst the Ar'Eisyyan is that of "Unnatural". In such cases the expelling of these foreigner's from their Sky-Continent is common.

All Ar'Eisyyan are educated and raised in a society cohesive with the "Lawful Good" alignment. Respect for others, community properties, and frequent social interactions promote healthy and wise conduct amongst their members. Ar'Eisyyan who find themselves discontented with their way of life often leave the Crystal World for the lands below. These members retain their rank and are always welcomed back onto the Sky-continent should they return.

Summary::Ar'Eisyyan are very similar to many breeds of high elves. Tall, regal, composed, and well-kept in their appearance. All Ar'Eisyyans have a pinkish tone to their skin and reflective golden hair of variable length. They prefer celestial images and the colors red, blue, white, and gold.

The Ar'Eisyyan practice many religions and worship many deities. They widely prefer deities of the "Lawful Good" alignment.

They also possess a unique from of hormone communication which allows members of the Ar'Eisyyan race to transmit their emotional and mental status between one another over short distances. As such, the term "How are you doing today?" is never heard among their people. A simple nod of the head suffices for a casual greeting. 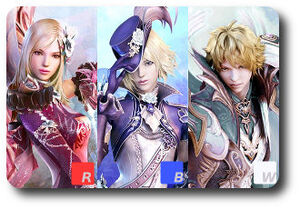 The Ar'Eisyyan believe that every member of their race has membership within three distinct castes. The Red Caste, the Blue Caste, and the White Caste. While each Ar'Eisyyan is a member of all three castes their ranking among the castes is always quite varied.

Upon reaching adulthood it is common for an Ar'Eisyyan to hold a 2nd tier position in all three castes. From here they usually specialize and gain tiered ranks in only one or two of the three castes. Members of the 9th Tier share the responsibility for the continued growth and development of their individual castes. This has currently developed into a system of separate governing senates for each of the individual castes themselves.

Often called the "Red" Caste. The Red Caste are those belonging to the ways of the Warrior Discipline. Members are ranked on a tier between one and nine. These tiers measure your accomplishments within the Disciplines of the Warrior.

Devote members of this caste often decorate themselves in exotic tattoo's and squad images.

Often called the "Blue" Caste. The Blue Caste are those belonging to the ways of the Crystal Discipline. Members are ranked on a tier between one and nine. These tiers represent your accomplishments in the ways of magic and religion.

Devote members of this caste often wear ornate headdresses and carry tall rods to distinguish their educated and advanced position.

Often called the "White" Caste. The White Caste are those belonging to the Discipline of Creation. Members are ranked on a tier between one and nine. These tiers represent your accomplishments in the ways of crafting, support, and item creation.

Devote members of this caste often develop blue tinted hands and palms because of their frequent interaction with the Star-Forge. This is common side-effect of working for hours without a proper break or respite.

Most foreigner's are treated with respect as vacationers or spectators. They however receive none of the privileges of being a member of any caste. This includes the ability to buy and sell rare goods and services.

Ar'Eisyyans can be unique in that they all adopt a Character Class rather than an NPC Class during their formal Education. While rarely ever going as far as selecting a Prestige Class during their development, they remain vigilant in their personal progress and achievements. Your own personal ranking within the Three Castes is very much dependent upon the number of Class Levels you have acquired within the Martial, Arcane, and Divine disciplines of life. 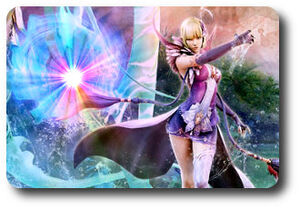 The most unique ability among the Ar'Eisyyan is their ability to summon the Intelligent Animus "Star-Forge". These small star-formations are able to create new items and structures through the use of gold metal.

The Star-Forge is able to absorb metal gold and craft it into new items and structures with the aid of the Ar'Eisyyan Artisan. This process is a type of "Reverse Alchemy". Where Alchemy can be the process from which base metals are turned to gold, Star-forge Crafting is very much the opposite. The Star-forge turning gold into base metals, ornate structures, and complex item formations.

The Star-Forge is a summon-able semi-intelligent star-formation. It often appears as a small blue star held within a spherical white coral cage. This cage or "Gate" begins in size about as large as the Ar'Eisyyan Artisan's chest and most of the creation process takes place within it. The Artisan is able to summon the Star-Forge in any location and simply resume his work as needed.

The coral cage of the Star-Forge, often called the "Gate" or workshop, is expandable to any size which the Artisan desires. In this way they can create small items or large structures using only a personal Star-Forge. It is widely believed that The Crystal World was itself created and built from a single Star-Forge.

A Star-Forge works in unison with the Craft Skill and simply replaces the need for tools or a workspace.

Retrieved from "https://dungeons.fandom.com/wiki/Ar%27_Eisyyan_(3.5e_Race)?oldid=65049"
Community content is available under CC-BY-SA unless otherwise noted.